Is there a fashion industry in Islamic countries?

Share Is there a fashion industry in the countries of Islam?

Receive an email a day with our articles:

Of course there is a fashion industry in these countries, and a very important one! Bloomberg estimates that the Muslim fashion business has an annual turnover of around 76,000 million euros. It is also the sector of the population with the highest rate of young people: 50% are under twenty-five years old.

Twice a year, Istanbul hosts its own fashion week that brings together a diverse audience, ranging from religious conservatives to social liberals. But if there is one thing that characterizes the new trends, it is their versatility, which allows new designs to be adapted to the most conservative tastes.

Among the most popular fashion brands are the following Essa, Bashar Assaf, Asudari that not only operate in Dubai but also export to Europe and the United States.

In the Middle East, in the United Arab Emirates, specifically in Dubai, there are many designers who even create capsule collections for Ramadan. The abaya in Dubai is a traditional dress, a long black robe that covers women from head to toe. This symbol of modesty for women - along with the white khundura worn by men - is now considered part of the national dress of the Emirates. For this reason, it has begun to be made in a large number of colors, with new cuts and embroideries, becoming not only a cultural symbol but also a social one.

Designer Madiyah Al Sharqi has just introduced an elegant line of accessorized dresses and tunics with layers, perfect to be worn during this important celebration. The garments have been made in sherbet and pastel tones in silk crêpe fabrics with a very good drape. These robes are adorned with collars embroidered with delicate lace details, or with beads and beading, and some are also accessorized with elegant capes. The only downside is that this collection, for example, is only sold in a very famous Dubai boutique called Symphony.

The designer Fatema Fardan also invites us to stroll through her particular flowery garden with a collection specially conceived for this year's Ramadan. Inspired by the art and fluidity of watercolors, this collection uses hand-painted techniques to print geometric and floral figures. The fabrics used are usually silk or silk crêpes. Very delicate and vaporous fabrics that seem to float in the wind, giving life to a summer line of caftans, suits and coats that are sophisticated but very wearable.

Designer Hessa Alfalasi, creator of the HF Boutique brand, has created a collection for modern Saudi women inspired by tradition with Art Deco-inspired embroidery and geometric prints capable of bringing an avant-garde touch to the abaya. Some of these garments have also been embellished with semi-precious stones to make them all the more glamourous. The palette wanted to break with the familiar black by combining it with white and grey, leaving monochrome colors for more formal and refined looks. 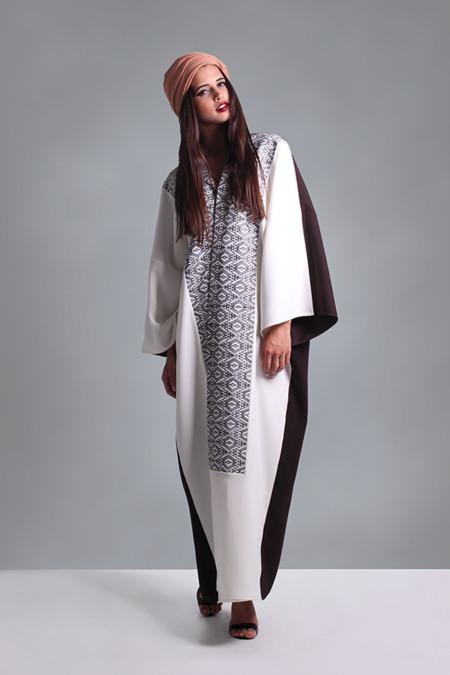 If you've suffered with anxiety you know the pain it can cause. You can control that pain. Remove the pain and flou… https://t.co/VQCvl6IV5D

Some of the big brands in the world of fashion and luxury, seeing the purchasing power that is handled in these countries, have begun to design capsule collections that, at the moment, they only sell in their flagship stores in the most important cities of the East, such as Donna Karan, Chanel, Burberry and Oscar de la Renta.

Just in time for the holy month of Muslims, the firm Oscar de la Renta has presented a wonderful capsule collection made up of exclusive caftans, each one more chic. Made from the finest fabrics, these garments have been embellished with magnificent intricate embroidery, and come in a wide color palette, so there's something for everyone: black with silver and gold highlights, blues set with royal turquoise, coral , and even iridescent to feel like Scheherazade herself.

Is there a Muslim low cost?

The low cost option is also contemplated through the Mipsterz brands, which borrowed its name from a neologism that means half Muslim, half hipster, and that emerged after some young women recorded themselves on video in November 2013 practicing skateboarding, with music Jay Z fonde, but without giving up the veil, Naghmeh Kiumarsi or Poosh Fashion who have fun playing with the finishes, colors and drawings of traditional clothing, promoting the individuality of their clients.

Designer Ibtihaj Muhammad, founder of the Louelia brand, designs garments and accessories that she updates through trendy prints and embellishments but also respects the Islamic code of modesty. The brand has only been operating for two seasons, but has already sold more than 4,000 garments, since tradition can also rhyme with trend.

The latest to join this trend has been Mango. Last week we received his latest lookbook in the newsroom where three proposals for Ramadan at popular prices also appeared.

The Vogue with a veil

There is even a fashion magazine called Ala which the specialized press refers to as the veiled Vogue. In this magazine you can see fashion editorials where the models wear brightly colored clothes with modern cuts without losing their modesty or the values ​​of Islam.

The veil is not necessarily a family imposition. Curiously, it has been the young university students who, little by little, have re-introduced the fashion of the veil in their homes because, in many cases, it has become a sign of cultural vindication and a sign of feminine vindication linked to the oldest meaning of the hijab, which symbolizes that the wearer is not an object woman.

Eastern Fashion in the Blogosphere

But the fashion of the East is not only in Dubai, in large luxury boutiques. The best example of this is the blogger Dina Toki-O, a 25-year-old woman of Egyptian origin, but raised in London, who has become the symbol of all hijabists in just five years. That is to say, of all the Muslim women who wear a veil and who have a true passion for fashion.

After dropping out of design studies at university because she was wearing a veil, and not willing to give it up, Dina started blogging in 2011 to show the world that you can be fabulous while wearing a hijab.

On her blog, with 170,000 followers, Dina explains through tutorials that she records on video and uploads to YouTube how to learn how to tie a hijab with style, but it has really been through her own brand Days of Dolls - where she combines urban style and respect for Muslim clothing codes -, with which this designer has become very famous. So much so that on Instagram she already has 418,000 followers. So to the question of whether there is a fashion industry in the countries of Islam, now we can answer yes emphatically, don't you think?

Share Is there a fashion industry in the countries of Islam?

Paula Echevarría's military coat is the basic one to invest in without regretting: it is elegant, very warm and VERY ORIGINAL
Haute Couture or not? The meaning of this concept in 2021